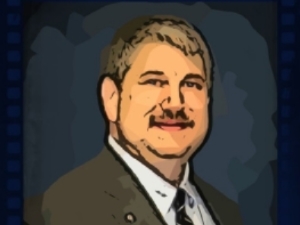 Jim was born and raised in Chicagoland. He served on active duty in the United States Air Force from 1983 to 2007. When Jim retired, he and his family returned to his wife’s hometown of Cheyenne, Wyoming.

During his career he served just over a decade in Europe and the remaining fourteen years in the continental United States, including being assigned to F. E. Warren Air Force Base, WY on two occasions. He likes to tell people God sent him back to Cheyenne because he did not meet his wife on the first go around.

In 2014 Jim became a member of Veterans of Foreign Wars Frontier Post 11453 and during the spring of 2016-2019 he performed the duties of Post Quartermaster. From 2019-2020 served as Junior Vice Commander. In 2020 he began serving as Post Commander. Additionally in 2019 he started a 3-year commitment as Trustee for VFW Wyoming District 5.

The Post Commander is the key officer of the Post. They, alone, represent the judicial branch of the organization and also have some of the responsibilities of the executive branch. They preside at all meetings, enforce the rules, appoint committees not otherwise provided for, and make certain that the other officers and committeemen perform their duties.

We know it is not all about a 3-day weekend at the beginning Summer.

This update from our partners at TRICARE is significant, so please review the update and as always, share with your military networks.

KANSAS CITY, Mo. - The Veterans of Foreign Wars (VFW) is proud to announce the more than 1.5 million VFW and VFW Auxiliary members...