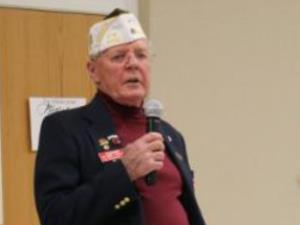 Everett "Wink" Winkler was born in Hammond Indiana on February 13, 1944. He was raised in Northern Wisconsin until he enlisted in the US Air Force in February of 1961. He enjoyed his time serving his country and took advantage of as many learning and training opportunities as he could. He completed two tours to Vietnam and then stationed at F.E Warren Air Force Base in Cheyenne, Wyoming where he decided after 20 years of service to retire on March 01, 1981.

He continued living in Cheyenne and owned a 4-wheel drive center and a trucking company. In 1990 he retired, sold his business and is enjoying life.

Wink and his wife Patti are both retired and are raising their grandson Mikey age 9 whom they have had since he was 6 months old. He is a true blessing to the couple, as well as all of their children. Wink was our Post Commander from 2009 - 2017.

The Post Commander is the key officer of the Post. They, alone, represent the judicial branch of the organization and also have some of the responsibilities of the executive branch. They preside at all meetings, enforce the rules, appoint committees not otherwise provided for, and make certain that the other officers and committeemen perform their duties.

Teacher of the Year

Our Post nominee for Teacher of the Year wins at Department

It would seem Pinedale VFW Post has been handing out Dictionaries for more than a decade.

COVID-19 is affecting the lives of every citizen in the world. In America, we know our veterans are #StillServing ... rising to meet the chal...